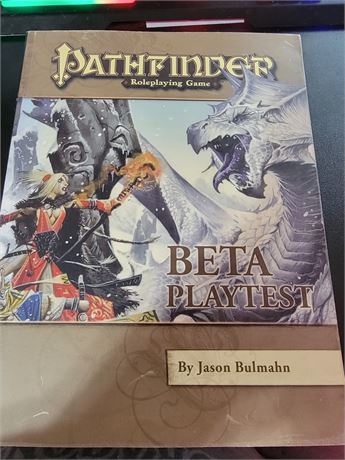 Up for auction is a copy of the Pathfinder (1e) Beta Playtest rulebook.

The book is in good condition with minor to moderate shelf wear. My name is printed in black ink in the upper left corner of the inside front cover (see photos).

“The Pathfinder Roleplaying Game Beta, a complete stand-alone fantasy RPG, takes your fantasy campaigns to new heights of adventure!
Backward-compatible with the 3.5 fantasy rules but offering new solutions and options that place it firmly on the cutting edge, the Pathfinder Roleplaying Game Beta release is the result of the largest open public playtest in RPG history.