Paths of Power: A Sourcebook of Base and Prestige Classes 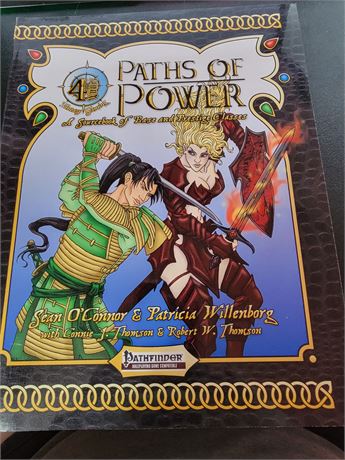 Up for auction is a rare, 3rd party publisher sourcebook for the Pathfinder (1e) roleplaying game. Paths of Power: A Sourcebook of Base and Prestige Classes was written by Sean O'Connor & Patricia Willenborg, with Connie Thomson and Robert Thomson and published in 2009 by 4 Winds Fantasy Gaming.

CHOOSE YOUR OWN DESTINY

Just as we in the real world can choose from many different paths in our lives, so should our characters. Go beyond the standard options with Paths of Power.

There are new feats and skills for the classes and class options, as well as spell lists and new spells for the spellcasting classes. New equipment and magic items unique to some of the classes are included. Characters with the same class tend to gravitate toward each other and work together - a number of organizations that members of the new classes might belong to are outlined as well.

With both PC and NPC options, Paths of Power will be a wonderful asset for players and Game Masters alike!