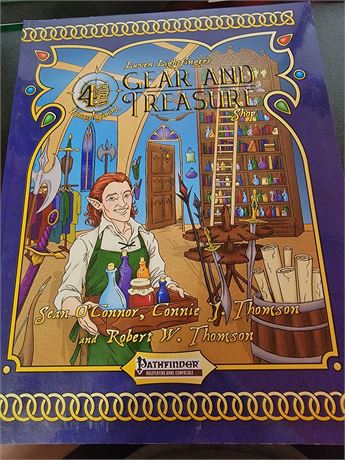 Up for auction is a rare, 3rd party publisher sourcebook for the Pathfinder (1e) roleplaying game. Luven Lightfinger's Gear & Treasure Shop was written by Sean O'Connor, Connie Thomson, and Robert Thomson and published in 2010 by 4 Winds Fantasy Gaming. This copy has been signed on the title page by Connie and Robert.

COME ON IN AND LOOK AROUND! I'LL BE IN THE BACK IF YOU NEED ANYTHING...

In his years traveling the lands with the Company of the Sunset, Luven Lightfinger learned a thing or two about what equipment an adventurer really needs. The average general store can provide a lot of the basics, but Luven and his companions quickly realized that there are many other items that can make life on the road (and crawling through dungeons) easier and safer. When the time came to retire from adventuring, Luven drew upon the lessons he'd learned on the trail and opened a store, catering to those hardy souls who hear the call of the open road as strongly as he did.

Part sourcebook, part catalogue, Luven Lightfinger's Gear and Treasure Shop is chock full of new items for outfitting your characters. From weapons, armor and trail gear to potions, oils and kits, Luven's shop has it all. He stocks locally produced goods as well as imports from exotic locales, and he guarantees he'll have at least one item in his inventory that you've never seen before. Interested in purchasing some magic items? Luven keeps his collection of those in the back room. Always ready to help out a fellow entrepreneur, Luven will even tell you all about his shop and how he set it up.

No one will want to spend all of their reward at the tavern again after stepping inside Luven Lightfinger's Gear and Treasure Shop!

4 Winds Fantasy Gaming - Bringing unique RPG products to all corners of the world!