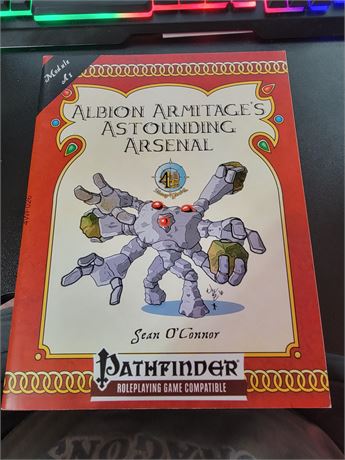 Up for auction is a rare, out-of-print 3rd party publisher module for the Pathfinder (1e) roleplaying game. Albion Armitage's Astounding Arsenal was written by Sean O'Connor and published in 2010 by 4 Winds Fantasy Gaming.

The module is in good condition with only minor shelf wear. It does have my name printed in red ink in the upper left corner of the inside front cover (see photos).

A dying man uses his last ounce of strength to hand you a map. A magical map, showing the way to Albion Armitage's Astounding Arsenal-a mysterious and oft-disbelieved weapons arsenal that not only changes locations, but even moves from one plane of existence to another. Some say it even moves from one reality to another... Only those with a map can reach the arsenal, and it's up to you to succeed where the first courier failed. But there are those who are willing to do anything to get that map-can you avoid the villains who would stop you at any cost? Albion Armitage's Astounding Arsenal is an action-packed fantasy adventure designed to challenge a party of four to six 8th-10th level characters. Information on scaling the adventure for higher- or lower-level parties is included. Also included are battle maps, NPC stats, two new creatures, and a wide assortment of new magical and mundane weapons and armor. "The Arsenal is real, my young friends. But even the best equipment doesn't make you immortal. Remember that..."